Traumatic Brain Injuries can be either: severe, moderate, or mild.  The severity of the brain injury is determined by a common scale, the Glasglow Coma Scale.

Severe traumatic brain injuries are the easiest to prove.  It is defined as a brain injury resulting in loss of consciousness for more than 6 hours and a Glasglow Coma Scale score of 3 to 8.

Moderate traumatic brain injuries have by definition objective signs which serve as evidence to support its existence.  A person suffering from a moderate TBI will have lost consciousness for 20 minutes to 6 hours, and score a 9 to 12 on the Glasglow Coma Scale.

Mild traumatic brain injuries (mTBI) have a name that is misleading.  A mTBI can have severe impacts on the injured victim’s life.  Even more, a mTBI cannot always be seen using standard imaging devices such as an MRI or CT scan.  The Report to Congress on Mild Traumatic Brain Injuries by the Center for Disease Control and Prevention (CDC) states that the impact of a mild traumatic brain injury is in fact not “mild.”  The report also states that a mild traumatic brain injury is a serious public health problem and there is evidence that these injuries can cause significant life-long impairment.  Moreover, the U.S. Department of Health and Human Services states that mild traumatic brain injuries have an impact on an individual’s ability cognitively, emotionally, and psychiatrically.  The Center for Disease Control also states that 15% of these injuries result in persistent disabling effects. Furthermore, the U.S. Military and the Federal government have conducted many studies and have released many publications discussing the results of explosion blast incidents.

Fortunately, it is possible for people to get better after suffering a Traumatic Brain Injury.  But the recovery process may be long and slow. Moreover, even mild traumatic brain injuries can have severe impacts. For example, a concussion is defined as a Mild Traumatic Brain Injury.  Once a certain amount of work is impacted on the brain, then a certain flow of potassium is released causing a concussion. There is nothing “mild” about this type of traumatic brain injury. About 75% to 80% of all brain injuries are considered “mild.”  There can be lasting harmful effects. The victim may not be able to perform their job functions as they had in the past, which has an impact on the victim’s psyche and the victim’s ability to provide support to family and loved ones. The common signs and symptoms of a concussion include loss of consciousness (LOC), post traumatic amnesia (PTA), headache, confusion, dizziness, fatigue, drowsiness, nausea, vomiting, hypersensitivity to loud noise and bright lights, and irritability.  The neurocognitive impairments associated with a concussion include memory impairment, slower reaction time, slower processing speed, poor attention, and poor concentration.

Contact The Sterling Firm to speak with a West Hollywood lawyer experienced in handling head and brain injury cases.  We can help! Contact us now! 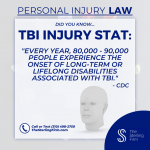